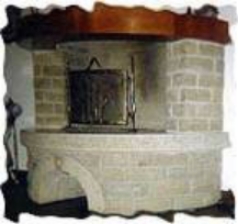 The profession of the stonemason has been underestimated since antiquity: "Sculptor without art", a quarry worker who cuts the stone and works it with bits and chisel to build works in series. The only ability that has been attributed to him is to know the material he transforms. Know where to mark with the charcoal to make the cognare and then beat the ponciotti, to cut it in the desired way.  The trincante or spalla cut must follow the veins and the stonemason observes the stone well before working it! Not only does this know how to do and the numerous squares and buildings and monuments built with the use of local or imported stones are proof of this. His works are often anonymous but by observing them with sensitivity one can imagine the labors of those who had to fight against the hostile nature that had to provide him with this job the necessary for the sustenance of his family. When the stonemason dedicated himself to works of art that were not just shaping or preparing paving stones for the squares and cordoned for the avenues, he knew he had learned art and raised his children and no longer had to produce for the sole economic need. Then his new works were wells and fountains, columns and pillars, chimneys, arches with hand-chiseled strips with straight edges, family emblems, exposed walls where each stone laid collects the art of shaping. The traguardo was not only a destination, but also the ability in jargon to work the rough stone in an orderly and precise manner. The cement or lime mortar was little and was used only to build a regular escape because the l'opus incertum had to preserve the elegance that history reserved for it. Today we are far from the tiring but gratifying art. What was is "State" and the artistic and cultural heritage is left ruinously decay. Since the war, part of us has had to emigrate to practice elsewhere. Our country has underestimated us and has taken away our profession, identity and culture. Capitalism does not always help the development and conservation of historical heritage but only transforms it into an end in itself without taking into account things that are priceless.